In analogy with racism and sexism, speciesism refers to the ideology which considers that the lives and the interests of animals can be neglected solely because they are from a different species. Non-membership in the human species is supposed to justify indifference to the fundamental interests of other sentient beings, especially their interest in not being harmed or killed. However, an individual’s species is not a relevant basis to decide whether he or she matters or not, just like “race” or sex.

Speciesism refers to a political phenomenon: the ideology which organizes our social representations of the enslavement and the murderous exploitation of non-human animals. Speciesism creates the impression that regarding non-human animals as simple resources to be used and abused by human beings is just, normal, necessary and trivial.

A scale of beings

A repudiation of individuals

In practice, speciesism hides the subjective lives of animals (what they feel, think and want), their existence as individuals who have their own lives and desires, the fate they are subjected to and the rights we should recognize them. Speciesism grounds the neglect of non-human animals and the failure to take their interests into account which characterize our societies, and makes questioning this neglect and their exploitation taboo.

At last, this taboo is eroding, but the speciesism which targets aquatic animals is especially persistent. Our initiative aims to undermine it. 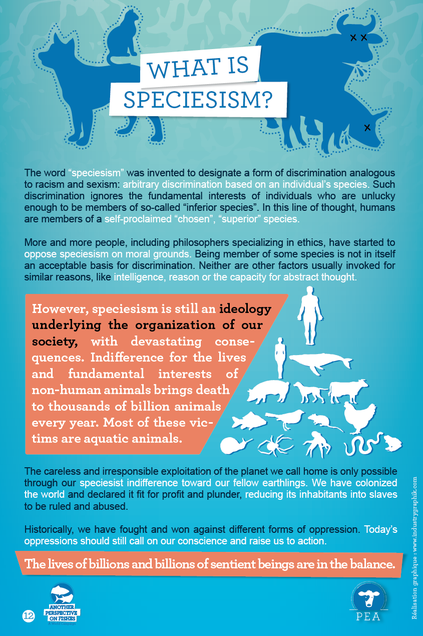