Industrial fishing is extremely brutal and decimate fish. About a quarter of the catch is discarded at sea. A third of it is transformed into fish meal and oil, which are used, among other uses, to feed farmed animals, including fishes and crustaceans. Fishing kills countless billions of fish each year. In most cases, their death is neither fast nor painless.

In trawl fishing, a boat chases a shoal of fish with a huge net. Usually, a heavy chain attached to the net scrapes the ocean bottom to dislodge the animals, leaving a devastated desert behind. Fish are terrorized and swim until exhaustion. Accumulating at the end of the net, they are compressed together for hours, with various types of debris and rocks skinning them. Severely wounded, they sometimes can't even breathe due to the compression.
Because of the quick ascent from the depths, the decompression causes their swimbladder to explode, their eyes to pop out of their orbite, their oesophagus or stomach out of their mouth.
Small fish are dumped into ice where they slowly die of asphyxia, or by being crushed by the other layers. Bigger fish are usually eviscerated while fully conscious. Meanwhile, unwanted fish (« bycatch ») are dumped over the sides of the boat, sometimes with a pitchfork. 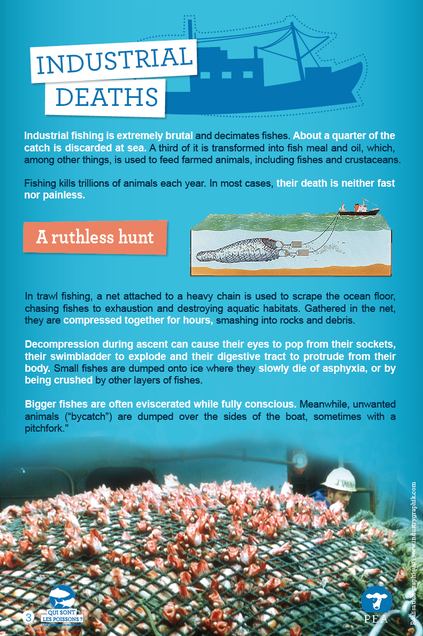 Caught in the trap (seine fishing)

Seines (or dragnets) are used to catch shallow-living fish (sardines, anchovies, herring, tuna fish...). Seine fishing vessels set up large vertical dragnets, sometimes miles-long, around fish shoals. These 300 feet-high nets constrict on the fish and are hoisted on board. Fish are usually dumped in brine kept liquid under the freezing point. Some fish die crushed or asphyxiated in the process. The others die of thermal shock.

Prisoners of the net (gillnets)

Before lunch, fishermen can set up nearly two miles of gillnets (drift nets or set gillnets). These nets hang from the surface down to a hundred feet. Fish swim into them unaware. As they try to back out, their gills and fins become entangled in the netting. Many die from asphyxiation. Others fight against the sharp lines of the net, cut themselves and bleed to death. The nets are not retrieved every day and the animals agonize for hours, even days. Captive fish are eaten alive by parasites or preyed on by other fish. When the net is hoisted on board, hooks are used to extract the animals from the net. 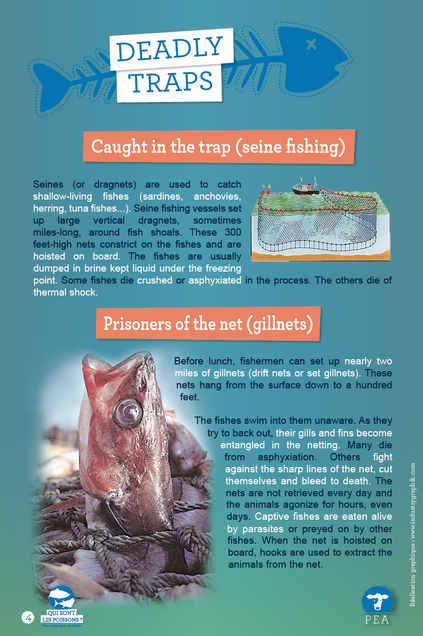 Longlines can be miles-long and carry hundreds or thousands of baited hooks. They lie at the bottom of the sea, in mid-level waters or near surface and are used to catch larger fish (swordfish, tuna fish and sharks) or small fish. Many swallow the hook, which then rips through their stomach as they struggle. Since some lines are only retrieved after several hours, sometimes days, these fish endure prolonged suffering.

Approximately 25% of caught fish are thrown back in the sea, dead, injured or exhausted – because they are too small or unwanted. This massacre is increasing since, as conservation measures, minimum catch sizes and authorized fishing quotas were adopted. Young fish are still caught, but now dumped back in the see, usually dead.

When quotas are met for one species, all the fish of this species will be rejected as the fishing goes on to meet quotas for other species. 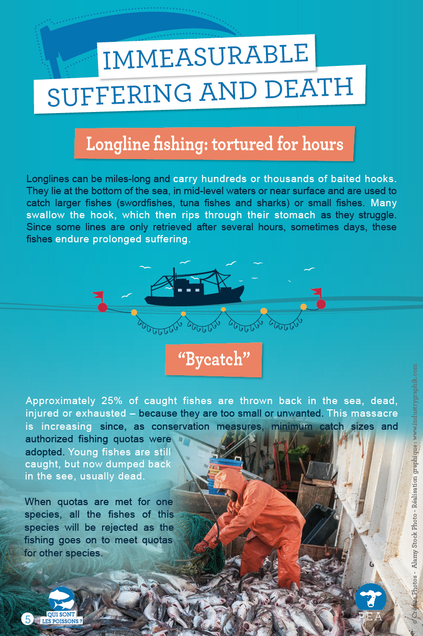 We speak of “overfishing” when the onslaught becomes so deadly that entire populations of fish cannot rebuild themselves and fade toward total extinction.

The scope of the carnage is largely ignored. “Overfishing” has led to the complete collapse of some populations. Despite the continuous development of fishing technologies and the increasing number of fishing vessels, the number of fish caught plateaued twenty years ago at 90 million metric tons a year. Fishing operations go deeper and deeper every year, bringing back increasingly smaller fish. Hence, a ton of fish caught today kills more individuals than ever. 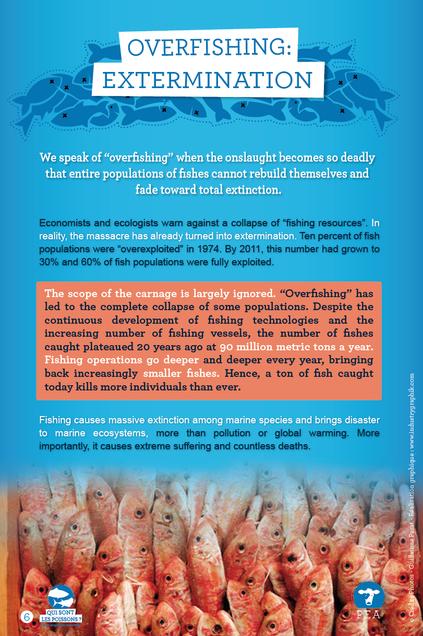 The world’s production of farmed fish is growing fast. Fish farms now provide more than 50% of the world’s fish and shrimps directly used for human consumption.

Hundreds of billions of fish live short, miserable lives, packed in underwater cages, basins or tanks. Some fish farms are prisons to half a million animals.

Their lives in these overcrowded conditions are full of stress, frustration and aggression. Injuries are frequent and the animals are afflicted by flesh-eating parasites and constant infections. Mortality rates are often worse than those of the worst factory farm operations.

Additionally, crustaceans and highly valued fish are usually carnivorous and are fed small wild fish specifically caught to be processed into fish meal and oil.

Farmed fish are sometimes stunned before slaughter, either through blunt force, electrocution or water saturation in CO2. The physical blows sometimes injure them without knocking them unconscious. Electrocution leaves 10% of the animals fully conscious. Water saturation is deemed “inhumane” by European authorities. Most fish are simply left to die from asphyxiation in open air. Many are bled and eviscerated while still conscious. 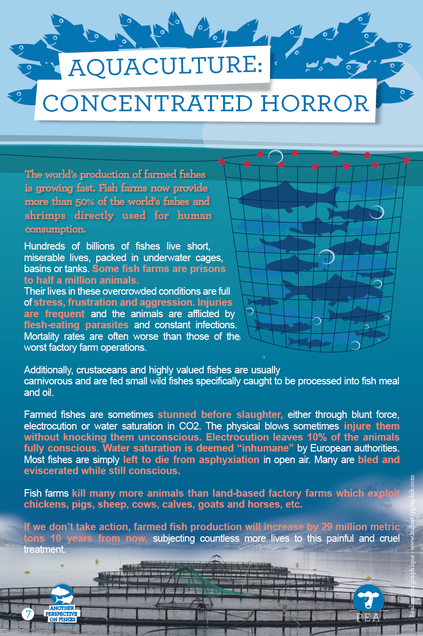 Hundreds of millions of stressed and vulnerable fish are confined to glass prisons, subjected to temperature variations and water contamination. Unable to hide from threats, they sometimes panic and crash against glass walls, killing themselves. Vibrations from loudspeakers or slammed doors can inflict them intense stress, causing lethal wounds.

Confined to explore a few liters of water and to eat the same food again and again, they often die of boredom. When they lose a companion, they can feel depressed and wither. Only 10% survive their introduction into fish tanks and most fish are replaced in the year. Each individual is worth only a few dollars or pounds and there are no laws regulating their trade or captivity.

Many fish die in transport from the location of their capture or the fish farm. Capture itself kills and injures hundreds of millions of fish. Up to 60% die before exportation.

Ornamental fishkeeping is a human whim which has devastating consequences for these animals. 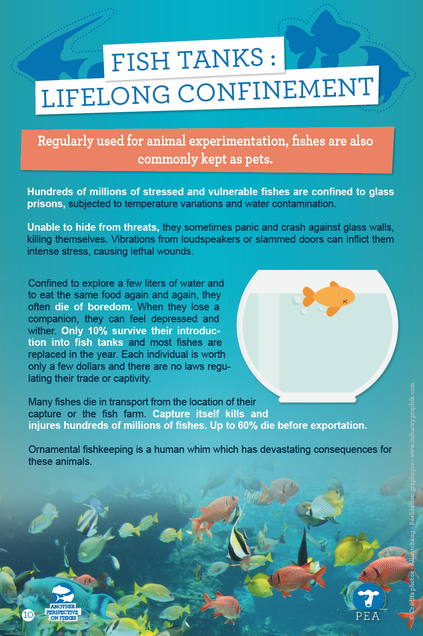 Pierced by fishing hooks, the victims of recreational fishing fight for their lives and freedom. Dragged by fishing lines for several minutes, fish expel gas from their swim bladders and sink – as they do when subjected to intense and prolonged electric shocks. They sometimes die exhausted before being pulled out of the water. Recreational fishing subjects them to intense fear and suffering.

Fishermen often haul larger fish on board by stabbing them with sharp poles, sometimes skinning them alive. Many fishermen thread ropes through the fish’s mouths and gills to hold them captive for hours in the water.

Most captured fish slowly die from asphyxiation. Carps can suffocate for an hour in open air.

Even the fish released once captured usually die from their wounds. Many are released with hooks still piercing through their gills or internal organs. They later die from infections, hunger or both.

Fishing is also a form of torture to smaller fish used as bait, as hooks are stabbed through their backs, lips and eyes.

Recreational fishing is far from harmless. We are not entitled to inflict such suffering and death without reason. Such violent practices should be outlawed. 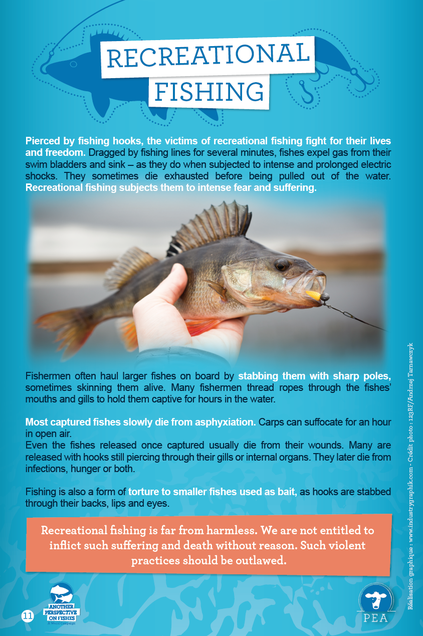